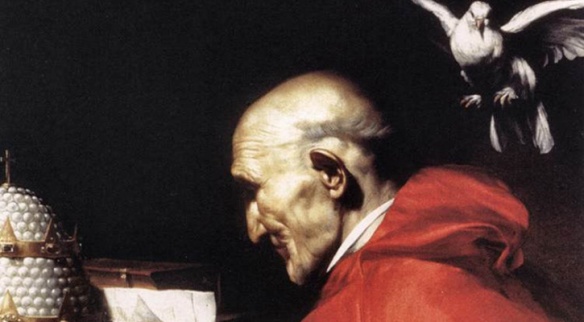 Today is the memorial of St. Gregory the Great. The gospel reading, particular to the memorial is Luke 22:24-30 which recounts when “argument broke out among the Apostles about which of them should be regarded as the greatest.” It is an ironic selection for a man who never wanted the Chair of Peter as it disturbed his life of prayer in the monastery – and yet when called, he knew to his call and roll was to serve.

Gregory became pope in 590 CE. It was an age when areas of the church were rather on their own, had gotten used to it, and were quite content to leave it as-is. The episcopacy in Gaul was drawn from the great territorial families, and identified with the families and not so much Rome.

Gregory of Tours was clear that his parochial horizon was limited to his region which was located in (modern day) France on the border between the Frankish culture of the Merovingians to the north and the Gallo-Roman culture of the south of Gaul during an age on the cusp of the dying world of Antiquity and the new culture of early medieval Europe.

In Visigothic Spain the bishops had little contact with Rome and in Italy the territories which had de facto fallen under the administration of the papacy were beset by the violent Lombard dukes and the rivalry of the Byzantines in the Exarchate of Ravenna and in the south.

Yet he worked to draw in the far reaches of the Church and is most known for his missionary zeal sending Augustine of Canterbury to England to re-evangelize the nation when the Roman world of England gave way to Anglo-Saxon rule.

He was a pivotal pope at a time when the Church in the West sorely needed visionary leadership in eccleisal life, liturgy, and music (Gregorian plainchant). Gregory never lost vision of his role. He is the pope who created the moniker, “Servant of the Servants of God.” He knew his place at the table.

Through the intercession of St. Gregory the Great, may each one of us come to know our place of service at the table.