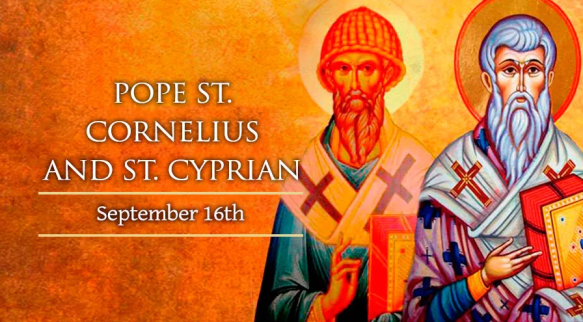 Saint Cornelius was elected Pope in 251 during the persecutions of the Emperor Decius. His first challenge, besides the ever present threat of the Roman authorities, was to bring an end to the schism brought on by the first anti-pope Novatian of Carthage. The great controversy that arose was as a result of the Decian persecution. In the wake of the persecution the question faced by the Church was whether or not the Church could pardon and receive back into the Church those who had apostatized in the face of martyrdom.

There were those among the Carthaginians whose position was that the lapsed should simple be readmitted. Novatian’s position was that they should be readmitted but in a condition of life-long penance and barred from the sacraments – including Reconciliation. Cornelius’ and Cyrian’s position was that they should be able to confess, receive appropriate penance (which in those years was very pubic and could last a full year), and then be reunited into full communion. At the core of Novatian’s argument was the sin of apostasy was not within the sacramental powers of the Church.

A synod of Bishops confirmed Cornelius as Pope and accepted his position regarding the lapsed. In 253 Cornelius was exiled by the emperor Gallus and died of the hardships he endured in exile. He is venerated as a martyr.

Saint Cyprian of Carthage is second in importance only to the great Saint Augustine as a figure and Father of the African church. He was a close friend of Pope Cornelius, and supported him both against the anti-pope Novatian and in his views concerning the re-admittance of apostates into the Church.

Saint Cyprian was born to wealthy pagans around the year 190, and was educated in the classics and in rhetoric. He converted at the age of 56, was ordained a priest a year later, and made bishop two years after that. His writings are of great importance, especially his treatise on The Unity of the Catholic Church, in which he argues that unity is grounded in the authority of the bishop, and among the bishops, in the primacy of the See of Rome.

In, “The Unity of the Catholic Church,” St. Cyprian writes, “You cannot have God for your Father if you do not have the Church for your mother…. God is one and Christ is one, and his Church is one; one is the faith, and one is the people cemented together by harmony into the strong unity of a body…. If we are the heirs of Christ, let us abide in the peace of Christ; if we are the sons of God, let us be lovers of peace.”

During the Decian persecutions Cyprian considered it wiser to go into hiding and guide his flock covertly rather than seek the glorious crown of martyrdom, a decision that his enemies attacked him for. On September 14, 258, however, he was martyred during the persecutions of the emperor Valerian.

The Novatian heresy led to a schismatic church in North Africa that persisted until the Moslem invasions of North Africa in the 7th and 8th centuries – upon which is disappeared from history.