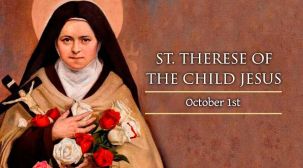 St. Thérèse was born January 2, 1873 in Alençon, France to pious parents. Both her parents were devout Catholics who would eventually become the first (and to date only) married couple canonized together by Pope Francis in 2015. The family had nine children. Three died as infants, a daughter died at age 5, and the surviving 5 daughters – including Thérèse – all became nuns. Her mother died when she was four, leaving her father and elder sisters to raise her. As to be expected it was a traumatic experience, which, in a way, was repeated as her oldest sister Pauline who had played a large part in Thérèse’s upbringing, also left the family. Pauline joined the cloistered Carmelite Monastery in Lisieux (1881). Thérèse was devastated. She understood that Pauline was cloistered and that she would never come back. The shock reawakened in her the trauma caused by her mother’s death.

Thérèse experienced a childhood with its normal range of ups and downs, but she often felt insignificant, and was often in need of more encouragement than her sisters. She suffered tremors associated with her “nerves.” She experienced a moment in prayer when a statue of the Blessed Virgin Mother smiled at her, but the disbelief by adults and religious figures led Thérèse to doubt herself and enter into a period of scrupulosity.

But on Christmas Day 1886 St. Thérèse had a profound experience of intimate union with God, which she described as a “complete conversion.”  Years later she stated that on that night she overcame the pressures she had faced since the death of her mother and said that “God worked a little miracle to make me grow up in an instant … On that blessed night… Jesus, who saw fit to make Himself a child out of love for me, saw fit to have me come forth from the swaddling clothes and imperfections of childhood.”

Almost a year later, in a papal audience during a pilgrimage to Rome, in 1887, she asked for permission from Pope Leo XIII to enter the Carmelite Monastery at the young age of 15. The legend is that the Pope, taken with her spirituality and fervor granted the request. The Pope’s actual response was recorded as: “Well, my child, do what the superiors decide… You will enter if it is God’s Will” and he blessed the young girl. The superior and priest advisor said “no.”  But then Thérèse was a persistent soul. She refused to leave the pope’s presence and had to be physically removed by the Swiss Guard. One suspects she showed the same resolve. Soon after that, the Bishop of Bayeux authorized the prioress to receive Thérèse. On 9 April 1888 she became a Carmelite postulant. She joined her two older sisters in the cloistered Carmelite community of Lisieux, Normandy; yet another sister, Céline, also later joined the order.

On entering, she devoted herself to living a life of holiness, doing all things with love and childlike trust in God. She struggled with life in the convent, but decided to make an effort to be charitable to all, especially those she didn’t like. She performed little acts of charity always, and little sacrifices not caring how unimportant they seemed.  These acts helped her come to a deeper understanding of her vocation.

She wrote in her autobiography that she had always dreamed of being a missionary, an Apostle, a martyr – yet she was a nun in a quiet cloister in France. How could she fulfill these longings?

“Charity gave me the key to my vocation. I understood that the Church had a Heart and that this Heart was burning with love. I knew that one love drove the members of the Church to action, that if this love were extinguished, the apostles would have proclaimed the Gospel no longer, the martyrs would have shed their blood no more. I understood that Love comprised all vocations, that Love was everything, that it embraced all times and places…in a word, that it was eternal! Then in the excess of my delirious joy, I cried out: O Jesus, my Love…my vocation, at last I have found it…My vocation is Love!”

Thérèse offered herself as a sacrificial victim to the merciful Love of God on June 9, 1895, the feast of the Most Holy Trinity and the following year, on the night between Holy Thursday and Good Friday, she noticed the first symptoms of Tuberculosis, the illness which would lead to her death.

Thérèse recognized in her illness the mysterious visitation of the divine Spouse and welcomed the suffering as an answer to her offering the previous year.  She also began to undergo a terrible trial of faith which lasted until her death a year and a half later.  “Her last words, ‘My God, I love you,’ are the seal of her life,” said Pope John Paul II.

Since her death, millions have been inspired by her ‘little way’ of loving God and neighbor. Many miracles have been attributed to her intercession. She had predicted during her earthly life that “My Heaven will be spent doing good on Earth.”

Saint Thérèse was proclaimed a Doctor of the Church by Pope John Paul II in 1997 – 100 years after her death at the age of 24. She is only the third woman to be so proclaimed, after Saint Catherine of Siena and Saint Teresa of Avila. St. Thérèse once wrote, “You know well enough that Our Lord does not look so much at the greatness of our actions, nor even at their difficulty, but at the love with which we do them.”