Over the last few weeks, we described Francis of Assisi in the role in which he is most popularly recognizable: the lover of nature and animals. Interestingly, this role is not original in the Christian tradition. In a valuable book reviewing the nature stories of Franciscan literature, Edward Armstrong shows that many of Francis’ attitudes have precedents in biblical, early Christian, and medieval ideas about nature. One group of scholars place Francis in the tradition of hermits who retired to wilderness and befriended animals. Others associate him with a theological trend, unfortunately not dominant, which affirms creation as containing intrinsic value. Most see the stories about Francis as having precedents in the already-known lives of saints, although they may have been true of Francis as well.

Fleeing from houses and cities to caves and other natural spots is a commonplace among ascetics. Some monastic writers, such as Basil, thought of natural landscapes as beautiful, as Francis did of the view from La Verna. Praising the works of creation, speaking of them as praising God in their own ways, and even exhorting them to glorify God, go back to biblical passages often repeated in liturgies in the Middle Ages, such as Psalm 148 and the Song of the Three Children, and Francis continued a long tradition when he did these things. Respecting nonhuman creatures, speaking of them in human terms, and giving moral instruction to them, which Francis exemplifies, were also habits of the hermits. Love of other creatures, even wild and seemingly unlovable ones, had appeared before, but it was such a notable characteristic of Francis that he became the archetype of this attitude

One truly atypical theme of Francis is his insistence on the goodness of creation. All his writings about created things are positive; he sees God in them, worships God through them, and gives thanks for them. He regards even “sister Death” as a blessing. When he remembers the biblical account of creation, he does not dwell on the fall or the grant of dominion, but the repeated pronouncement of God that all things created are “good.” This blessing is worthy of note because the attitude to creation was in his day ambivalent. Innocent III, the pope who approved Francis’ early rule and brotherhood, saw man as equal to the beasts, such that this equality lowered man. In his De miseria humane conditionis, Innocent wrote:

“The Lord God formed man from the slime of the earth,” [cf. Gen 2:7] an element having less dignity than others. …“Therefore the death of man and beast is the same, and the condition of them both is equal, and man has nothing more than the beast. Of earth they were made, and into earth they return together.” [Eccl 3:19-20]. . . What then is man but slime and ashes?”

The attitude expressed by the saint is quite different. The first biographer, Thomas of Celano, described Francis this way: “He discerned the hidden things of Creation with the eye of the heart, as one who had already been released into ‘the glorious liberty of the children of God.’”

Also original is Francis’ use of terms of family relationship to refer to created entities. He speaks of “Brother” Falcon, “Brother” Fire, “Sister” Moon, and “Sister” Water, pointing to a common birth in creation. St. Bonaventure writes of Francis: “When he bethought him of the first beginning of all things he was filled with a yet more overflowing charity, and would call the dumb animals, however small, by the names of brother and sister, forasmuch as he recognized in them the same origin as himself.” (Major Life 8:6) 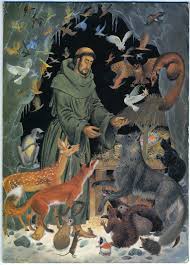 There is another element of his originality in respect to nature that often escapes notice: his emphasis on the presence of God in the diversity of created beings, and his desire that humans should rejoice in this diversity and glorify God for it and with it, and act in ways consistent with respect for it. This aspect of his uniqueness consisted of praising God through the diversity of created species. He expressed it as a life-affirming, creation-affirming joy which did not reduce everything to a pantheistic oneness, but which glorified God in each of the created beings and delighted in their individuality and distinctness.

All creation, in its parts and as a whole, was meant to lead people to God. Francis bespoke a sacramental view of creation. If God’s grace is mediated to people through elements such as water, wine, bread, and oil, why cannot it also be received in an analogous way from any creature? Francis was saying that matter is holy because God created it, incarnated himself in it, raised it from death, and took it to heaven with him in his ascension. It is fair to say that Francis saw the world as a sacrament, receiving God through every material reality.

1 thought on “Francis of Assisi: A Sacramental View of Nature”