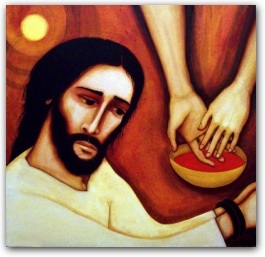 Jesus Is Condemned (27:11-25) The Gospel reading for Palm Sunday of the Lord’s Passion is quite lengthy and so will not be included here. It can be found at the USCCB website.

This is the official trial of Jesus, and yet the description sounds less like a formal judicial hearing than an example of oriental bargaining. Pilate, as prefect of Judea, had the sole authority to acquit or to condemn, and to determine the sentence. There is a perfunctory attempt at a formal examination of the prisoner, but increasingly the dominant force is not the official role of the governor but the demands of the Jewish leaders, backed by ‘the people’. It is here that the focus of Matthew’s attention falls, so that Pilate’s role is as a cast extra on the movie set whose sole role is at best a catalyst which helps to define unequivocally the people’s stance towards the Messiah. END_OF_DOCUMENT_TOKEN_TO_BE_REPLACED