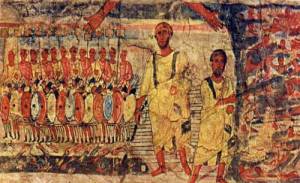 The Passover context must not be forgotten. As once Israel ate of the manna in the desert and was nourished by adhesion to the Law given at Sinai, so now the world is summoned to accept the further revelation of God in the broken body and spilled blood of the Son of Man. In this way all will have life, now and hereafter (vv. 53-54). These claims are further developed through vv. 55-57. Earlier parts of the discourse are recalled as Jesus insists that his flesh really is food (alethes estin brōsis) and his blood really is drink (alethes estin posis). This play on words recalls Jesus’ promise of the brōsis (food) that the Son of Man would give (v. 27), and his claim that over against all other bread from heaven, and especially the gift of the Law from heaven, the Father gives “the true bread from heaven” (v. 32: ton arton ek tou ouranou alethinon). Jesus is the true bread from heaven (v. 35). On the basis of the entire discourse Jesus lays claim to his flesh and blood as authentically (aletheis) food and drink. The midrashic explanation of v. 31 continues: through a total absorption (trōgein is again used) of the revelation of God made available through the bloody death of Jesus, believers will come to a mutuality in which they live in Jesus and Jesus lives in them (v. 56). This mutual indwelling (menein is used; cf. 15:4-7) flows from the union that exists between the Father and the Son (v. 57). Jesus’ words play on the verb “to live” (zōein). He refers to the Father as “the living Father” (ho zōn pater) who has sent his Son who has life in him because of the intimacy between the Father and the Son. If the one who sends is “living,” then the one who is sent lives because of the one who sent him (kagō zo dia ton patera). He thus has authority to pass on life to those who accept the revelation of the Father in the Son (v. 57). The idea of the reception of the revelation of God in and through the Son is not new (cf., for example, 3:11-21, 31-36), but the imagery has been changed by the Passover context. No longer does Jesus speak of “belief in” (cf. 3:12, 15, 18, 36), but of “the one who eats me” (v. 57b: ho trōgdn me). The expressions are parallel. As throughout the Gospel, unconditional commitment to the revelation of God in and through Jesus leads to life here and hereafter: the one who eats the flesh of Jesus will live because of him (v. 57b: kakeinos zēsei di’eme). As Jesus lives because of the Father (v. 57a), the believer lives and will live because of Jesus (v. 57b).

The discourse closes as it opened, comparing the bread that Israel’s ancestors ate in the desert and the bread that comes down from heaven (v. 58; cf. vv. 30-33). All former gifts from heaven have been surpassed. Playing upon the two possibilities of life—physical life that the manna could not provide, and eternal life that the true bread of life does give (cf. vv. 49-50)—Jesus points to the death of Israel’s ancestors and promises everlasting life to those who eat of the true bread from heaven. A new possibility has entered the human story. The Law was a gift of God (cf. 1:17), but it has been surpassed by Jesus, the bread from heaven (v. 35), promising his abiding presence (v. 56), communicating the life of the Father to all who consume this true bread (v. 57). On the occasion of the celebration of Passover Jesus announces that there is another bread from heaven that eclipses all the original bread offered to the ancestors of Israel (v. 58). “This he said in the synagogue, as he taught at Capernaum” (v. 59). Jesus has not moved. The discourse ends where it began: at Capernaum (vv. 24, 59). The narrator closes the discourse with a comment that reminds the reader that Jesus is in a Jewish center of worship during Passover time, uttering a message that presupposes, fulfills, and transcends a Jewish Passover tradition.

1 thought on “Bread of Life: the world”