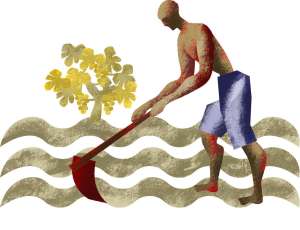 Matthew 21:28–32 28 “What is your opinion? A man had two sons. He came to the first and said, ‘Son, go out and work in the vineyard today.’ 29 He said in reply, ‘I will not,’ but afterwards he changed his mind and went. 30 The man came to the other son and gave the same order. He said in reply, ‘Yes, sir,’ but did not go. 31 Which of the two did his father’s will?” They answered, “The first.” Jesus said to them, “Amen, I say to you, tax collectors and prostitutes are entering the kingdom of God before you. 32 When John came to you in the way of righteousness, you did not believe him; but tax collectors and prostitutes did. Yet even when you saw that, you did not later change your minds and believe him.

Context. Jesus has already entered Jerusalem (Mt 21:1 ff) and been received by the people, proclaimed as Messiah, overturned the moneychanger’s tables (21:12-17), and had his authority questioned by the chief priests and elders. Jesus is performing signs and speaking in a way that the people are interpreting as Messianic – and there is a history there. Jesus is not the first messianic figure to come to Jerusalem and the chief priests and elders want to protect the people – although they have already concluded that Jesus is another false claimant. They have been amassing charges and accusations against Jesus and are simply waiting for the opportunity to bring him to trial and be done with him.

Unique to Matthew’s gospel, this short parable was, at its basic level of development, addressed to the chief priests and elders in defense of Jesus’ penchant for associating with sinners – those deemed unrighteous by the Jerusalem authorities. This is a dynamic that has been present in the gospel according to Matthew since the days on the banks of Jordan River when the same authorities came out to question John the Baptist.

That is perhaps why this round of the many encounters begins with reference to the Baptizer: When he had come into the temple area, the chief priests and the elders of the people approached him as he was teaching and said, “By what authority are you doing these things? And who gave you this authority?” Jesus said to them in reply, “I shall ask you one question, and if you answer it for me, then I shall tell you by what authority I do these things. Where was John’s baptism from? Was it of heavenly or human origin?” (21:23-25)

It is the Jerusalem authorities that are put on the spot. The leaders are standing (likely) in the midst of people who responded to John’s proclamation and the good news proclaimed in Jesus’ words and works. How will they respond to this challenge for they themselves to “fish or cut bait?” They are leaders of this ancient faith – how will they live out that faith. This is part and parcel of a theme popular in the Matthean gospel: faith that is spoken, but not lived, is empty. Calling out, “Lord, Lord” is not sufficient; the will of the Father must also be accomplished (see Matthew 7:21-23; 12:50;23:3-4). Promises and profession must be matched by performance.