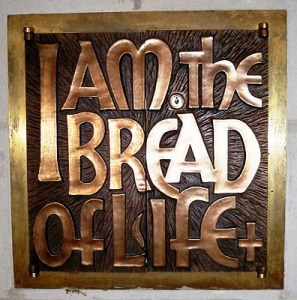 Eating the Living Bread. 47 Amen, amen, I say to you, whoever believes has eternal life. 48 I am the bread of life. 49 Your ancestors ate the manna in the desert, but they died; 50 this is the bread that comes down from heaven so that one may eat it and not die. 51 I am the living bread that came down from heaven; whoever eats this bread will live forever; and the bread that I will give is my flesh for the life of the world.”

The expression “Amen, amen, I say to you” (v. 47) also signals the beginning of a new section in the discourse (as before in 5:19, 24–25; 6:32). Yet this section opens with a reprise of familiar Johannine themes: The believer receives eternal life (6:27, 40); Jesus is the bread of life (6:35). These themes provide the theological grounding for what follows. As in 5:19–30, here the Fourth Evangelist advances Jesus’ argument by placing what Jesus has said previously in a new context. The interweaving and overlapping of theological themes evident here and throughout Jesus’ discourses help to create a cohesiveness of theological perspective throughout the Fourth Gospel

Jesus completes the comparison between the bread of heaven of which the crowd speaks and the bread of heaven of which he speaks. Previously, we read: 31 Our ancestors ate manna in the desert, as it is written: ‘He gave them bread from heaven to eat.’” 32 So Jesus said to them, “Amen, amen, I say to you, it was not Moses who gave the bread from heaven; my Father gives you the true bread from heaven. 33 For the bread of God is that which comes down from heaven and gives life to the world.” As noted already, Jesus’ words in 6:32–33 can be seen as his reinterpretation of the OT scripture cited by the crowd in 6:31. In vv. 50–51, Jesus continues to interpret that citation, this time focusing on the verb “to eat” (esthiō) – “…this is the bread that comes down from heaven so that one may eat it and not die. 51 I am the living bread that came down from heaven; whoever eats this bread will live forever; and the bread that I will give is my flesh for the life of the world.”

The manna eaten by the ancestors in the wilderness met the Israelites’ immediate needs for sustenance, but did not satisfy ultimate human needs; the ancestors died. The bread from heaven of which Jesus speaks, however, does satisfy ultimate human need. Those who eat the true bread from heaven (cf. 6:32) receive the gift of eternal life. The promise that no one will die (v. 50) is analogous to the promise that no one will hunger or thirst again (6:35): “Jesus said to them, ‘I am the bread of life; whoever comes to me will never hunger, and whoever believes in me will never thirst.’”

In v. 51, Jesus takes his interpretation of the verb “to eat” one step further. He begins by repeating his self-identification as the bread from heaven (v. 51a). “Living bread” (a synonym for “bread of life”), like the “living water” of 4:10–14, is life-giving. To underscore this, Jesus then repeats that eating this bread will give eternal life (v. 51b; cf. v. 50). He concludes his words with a dramatic twist, however: “The bread that I will give for the life of the world is my flesh” (v. 51c).

What does it mean for Jesus to speak of the gift of his flesh for the life of the world? First, the language at the end of v.51 recalls both 1:14 (“and the Word became flesh”) and 3:16 (“God so loved the world that he gave his only Son”). Verse 51 thus evokes the incarnation, the gift of Jesus’ life out of God’s love for the world. Second, it is possible to see an allusion to Jesus’ death in the language of v. 51c: Jesus will give up his life, his flesh, as an expression of the same love manifest in the incarnation (10:17–19; 15:13). Finally, any Christian reader of v. 51, from the Fourth Gospel’s first audience to the contemporary church, would hear eucharistic connotations in these words. The eucharistic imagery is not yet fully explicit (that will occur in vv. 52–58), but the direction of the imagery for the Christian reader is clear.

If the people were grumbling before, now they have move to a more serious contention: “The Jews quarreled among themselves, saying, ‘How can this man give us (his) flesh to eat?’” v.52)

John 6:47 Amen, Amen, I say to you: Moloney, a Johannine expert, says that John’s use of this expression is generally not stating “what follows is true, so pay attention,” but is used to link what came before with what follows. He offers a more contextual translation as “because this is the case.” Most scholars translate it literally.

John 6:49 your ancestors: This a change in Jesus’ language from v.31 when he spoke of “our ancestors.” It might point to one of several instances (8:17 and 8:56) when “your Law” and “your father Abraham” may well point to the later deep division between the synagogue and the church.

John 6:51 the bread that I will give for the life of the world is my flesh: Many of the words in this verse (ho artos, sarx, ego doso, hyper) reflect the celebration of the Eucharist and serve as an introduction to vv.51-58, considered the core of John’s Eucharistic theology.