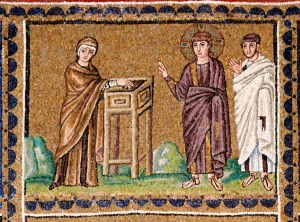 The Poor Widow and Jesus. ’ 41 He sat down opposite the treasury and observed how the crowd put money into the treasury. Many rich people put in large sums. 42 A poor widow also came and put in two small coins worth a few cents. 43 Calling his disciples to himself, he said to them, ‘Amen, I say to you, this poor widow put in more than all the other contributors to the treasury. 44 For they have all contributed from their surplus wealth, but she, from her poverty, has contributed all she had, her whole livelihood.’

We are conditioned to consider that Jesus is continuing his castigation of the scribes (religious leaders who use their position for their own gain) and their social counterparts, many rich people. By juxtaposition we then infer that the poor widow is praised for her giving of her whole livelihood and placing here full dependence upon God. We infer that, and perhaps rightly so, but there are many

David Lose (…in the Meantime) questions our assumptions:

How do you hear Jesus’ description of the poor widow’s offering – is it praise or lament? To put it another way: Is Jesus holding up the widow and her offering as an example of great faith and profound stewardship, or is he expressing his remorse that she has given – perhaps feels compelled – to give away the little she has left?

I’ll be honest, for most of my life, I’ve assumed it was the former. But recently I’ve been persuaded that it’s the latter. Here’s why:

All of this leads me to conclude that Jesus isn’t actually lifting her up as an example but rather decrying the circumstances that demand her to make such an offering, a sacrifice that will likely lead to destitution if not death. He is, in short, leveling a devastating critique against Temple practice and those who allow, let alone encourage, this woman to give “all she had to live on” (or, in a more literal translation of the Greek, her whole life!).

Other commentators go even farther. They note that Jesus is on “Tuesday” of Holy Week – meaning he will be crucified and die in four days. The poor widow possessed two coins (in other words, she had a choice to contribute other than both coins). Some wonder if the woman two, now destitute, will also soon pass from this life. At the beginning I noted the new verses beyond our periscope: As he was making his way out of the temple area one of his disciples said to him, ‘Look, teacher, what stones and what buildings! (Mark 13:1) Jesus has just watched a trusting woman give her all to an institution failing at its most basic divine charge: protection of the widow, the orphan, and the stranger. No institution steeped in such injustice will stand.

The image of an impoverished widow giving all that she has forms a remote parallel to the story of the poor widow and the prophet Elijah, who asks for her last bit of food (1 Kgs 17:8–16). In that case, the widow, her son, and the prophet are provided for during the famine. Jesus does not offer this widow any such reassurance. The contrast between her offering and all the others who are tossing in what they can spare exhibits the false values of a society that does not really offer sacrifice to God. Jesus has already told his disciples that persons must be willing to renounce their own desires, take up the cross, and become slaves of all in order to follow him (8:34; 9:35; 10:42–45). The widow’s story can be read as an anticipation of Jesus’ own sacrifice of his life