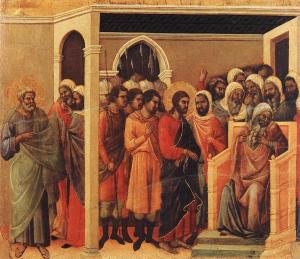 Where in the scene of Peter’s Denial (Luke 22:54-65), the focus and center of the narrative was Peter, here the focus returns to Jesus. Is this trial (hearing, meeting) by the religious authorities of Jerusalem, the role of Jesus as prophet and Messiah is at the forefront of the narrative. Jesus had foretold the primary events of this scene—both Peter’s threefold denial before the crowing of the cock (v. 34; vv. 56–61) and his own maltreatment (esp. 18:32; cf. 20:10–11 and 22:63–65).

As Joel Green has noted (p. 786), the scene before the Sanhedrin is the first of four scenes: the Sanhedrin (22:66–71), the hearing before Pilate (23:1–5), the hearing before Herod (vv. 6–12), and the sentencing of Jesus (vv.13–25). Although Jesus appears in each scene, other than minimal responses to the Jewish council (22:68–70) and to Pilate (23:3), he is silent and a passive participant in these trials. The single constant in these narratives is the active presence of the Jewish leadership. They are obviously and necessarily central in the first hearing, but also appear as Jesus’ accusers before Pilate and Herod; when Jesus is returned to Pilate, they are again present, calling for Jesus’ demise. Luke describes the leadership as “elders,” “leaders,”  chief priests, scribes, and “the crowds.” Especially against the backdrop of Pilate’s attempt to vindicate Jesus, it is evident that Jesus’ death is the consequence of the relentless and overpowering presence of the Jewish leadership.

What is at stake is who is the authentic interpreter of the will of God?  Jesus or the Sanhedrin? What is behind the scene is the heart of the intersection of God’s love and human freedom. The Son of God would lay down his life freely to redeem those who oppose him, but God would not refuse them the freedom to oppose him.  What love is this that will neither cease to love nor overrule our freedom to reject that love?

The Trial Before the Sanhedrin

66 When day came the council of elders of the people met, both chief priests and scribes, and they brought him before their Sanhedrin. 67 They said, “If you are the Messiah, tell us,” but he replied to them, “If I tell you, you will not believe, 68 and if I question, you will not respond. 69 But from this time on the Son of Man will be seated at the right hand of the power of God.” 70 They all asked, “Are you then the Son of God?” He replied to them, “You say that I am.” 71 Then they said, “What further need have we for testimony? We have heard it from his own mouth.”

The long nighttime ends with an early morning session before the Sanhedrin, the ruling council of the Jews in Jerusalem. Although the gospel accounts give this event the semblance of a “trial” it was probably an informal hearing as the leaders prepared their case against Jesus for presentation before the Roman governor. Luke’s description of a single meeting of the Sanhedrin, taking place at daybreak, is more likely than that of Mark and Matthew, who describe a night meeting followed by a morning session to carry out the decision. A night meeting of the Sanhedrin is otherwise unknown.

Jesus is unwilling to identify himself as the kind of Messiah popularly expected; rather, he speaks of himself as authoritative judge in his role as the Son of Man (Dan 7:13–14). They interpret this answer (correctly) as an affirmation of a special divine status; they can only view this as blasphemy, sufficient reason to condemn him to death (see Mark 14:62–64). The Sanhedrin was (likely) not empowered to impose the death sentence; they had to submit their accusation to the judgment of the Roman authority.

Luke’s narration of the events is distinctive for what it lacks in comparison to the Gospels of Mark and Matthew: there is no succession of false witnesses, no rending of the documents by the chief priests, no cry of blasphemy or statement that Jesus deserves death. As well there are unique features in what Luke includes: the whole Sanhedrin is involved in the questioning – thus the rejection is not from the chief priest alone, but the whole of the religious leadership.  And perhaps more importantly, Jesus’ response concerning his being Son of God is answered, not in terms of the parousia (as in Mark and Matthew), but in terms of the resurrection – after which the risen Christ will be seated at the right-hand of the Father.

Luke brings us quickly to the heart of the issue: the reader of this gospel knows from the opening scenes of the infancy narrative that Jesus is the “Messiah” and the “Son of Man”. But the opponents are closed to this truth.  They have not believed his words and deeds and an admission that he is the “Son of God” will not help their unbelief, because they do not seek him. Perhaps ironically, Jesus tells them, “in your very question, you possess the answer and the gateway to eternal life”: “You say that I am” (v.70).

The exultation of Jesus to the right hand of God is beginning in the Sanhedrin session; it will be advanced on the cross, where Jesus will speak of being in paradise this day (23:43); and it will be fulfilled in the ascension of Jesus which concludes the Gospel (24:50-51)

22:66-71 When day came: Luke recounts one daytime trial of Jesus (Luke 22:66-71) and hints at some type of preliminary nighttime investigation (Luke 22:54-65). Mark (and Matthew who follows Mark) has transferred incidents of this day into the nighttime interrogation with the result that there appear to be two Sanhedrin trials of Jesus in Mark (and Matthew)

22:66 council of elders of the people met: There have been many scholarly debates as to whether this “meeting” was a trial or not.  This question can not be clearly resolved. Fr. Raymond Brown’s The Death of the Messiah (Vol. 1), pp. 328-397 is a comprehensive treatment.  Brown’s estimate is that this is a legal proceeding, more attuned to our concept of a preliminary hearing.  In any case, that seems to be Luke’s treatment, as there are no religious charges preferred.  The only formal charges are political ones brought by the Roman authorities (23:1)

Sanhedrin: the word is a Hebraized form of a Greek word meaning a “council,” and refers to the elders, chief priests, and scribes who met under the high priest’s leadership to decide religious and legal questions that did not pertain to Rome’s interests. Jewish sources are not clear on the competence of the Sanhedrin to sentence and to execute during this period. Further mudding the picture is, even if they had executioner’s powers, the Sanhedrin were not allowed to hold capital trials on the eve of a Sabbath or a festival (m. Sanh 4:2).

22:71 “What further need have we for testimony? We have heard it from his own mouth.” : Luke does not report that the Jewish religious leaders charged Jesus with blasphemy (as do Mark and Matthew).  Rather you will find this is a taunt which comes from those mocking Jesus (v.65; the word blaspheme appears but is not translated by the NAB) and as a charge against Stephen (Acts 6:11)

Over the years I have compiled notes, documents, and items of interest about Scripture. Mostly for my own use and in teaching Bible studies in Catholic parishes.  The idea was possible to make something that is approachable, more than “Bible 101″ yet not too overwhelming, yet with notes for people that want more – and hopefully even if a person feels “stretched” by the content, it is not too much.  I have come to realize I have developed a little library – and so I thought I would share some.

When I began to compile I made no attempt to be careful about sourcing, copying entire passages, footnoting, or the even the modicum of appropriate credit – and so there is likely a lot of content that is not my own. My apologies to all.