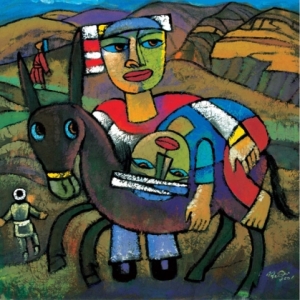 This coming Sunday marks our journey in Ordinary Time, the 15th Sunday in Year C. You can read a complete commentary on the Sunday Gospel here.

25 There was a scholar of the law who stood up to test him and said, “Teacher, what must I do to inherit eternal life?” 26 Jesus said to him, “What is written in the law? How do you read it?” 27 He said in reply, “You shall love the Lord, your God, with all your heart, with all your being, with all your strength, and with all your mind, and your neighbor as yourself.” 28 He replied to him, “You have answered correctly; do this and you will live.” 29 But because he wished to justify himself, he said to Jesus, “And who is my neighbor?”

30 Jesus replied, “A man fell victim to robbers as he went down from Jerusalem to Jericho. They stripped and beat him and went off leaving him half-dead. 31 A priest happened to be going down that road, but when he saw him, he passed by on the opposite side. 32 Likewise a Levite came to the place, and when he saw him, he passed by on the opposite side. 33 But a Samaritan traveler who came upon him was moved with compassion at the sight. 34 He approached the victim, poured oil and wine over his wounds and bandaged them. Then he lifted him up on his own animal, took him to an inn and cared for him. 35 The next day he took out two silver coins and gave them to the innkeeper with the instruction, ‘Take care of him. If you spend more than what I have given you, I shall repay you on my way back.’ 36 Which of these three, in your opinion, was neighbor to the robbers’ victim?” 37 He answered, “The one who treated him with mercy.” Jesus said to him, “Go and do likewise.” (Luke 10:25-37)

Just before the telling of the Parable of the Good Shepherd, Jesus had commissioned 72 disciples and sent them out of mission. In Luke 10:17 the disciples return with reports of great things being accomplished in the name and power of God. Jesus responds to their reports

21 At that very moment he rejoiced (in) the holy Spirit and said, “I give you praise, Father, Lord of heaven and earth, for although you have hidden these things from the wise and the learned you have revealed them to the childlike.  Yes, Father, such has been your gracious will. 22 All things have been handed over to me by my Father. No one knows who the Son is except the Father, and who the Father is except the Son and anyone to whom the Son wishes to reveal him.” 23 Turning to the disciples in private he said, “Blessed are the eyes that see what you see. 24 For I say to you, many prophets and kings desired to see what you see, but did not see it, and to hear what you hear, but did not hear it.” (Luke 10:21-24)

Jesus has thanked the Father for hiding “these things” from “the wise and the learned” (v.:21), and now, in our account, a “scholar of the law,” whom we would think is wise and learned, comes to test Jesus. In the end Jesus tells a parable in which other wise and learned men, religious leaders of Israel, and a Samaritan (not considered wise or learned by Jews)  “see” the man in the ditch (vv. 31-32). Will they “see” what Jesus desire to reveal to them or will it be hidden from them?

The biblical concept of mercy (hesed in Hebrew and eleos in Greek) is rich and wide; it is always strongly connected to love, specifically love in action. St. Paul writes about such mercy as does the early Church. In the 1st century church document, the Didache, the action flowing from mercy is demanded of the Christian (5.6, 15.4); those who have no mercy on the poor are condemned (5.2). The history of writings in the church repeats these themes, always connecting mercy as flowing from the love of God for humanity. Thomas Aquinas includes mercy as a special quality of charity (Summa Theologiae I, qu. 21, a. 3). Tradition has listed fourteen specific manifestations of mercy, seven corporal works (feed the hungry, give drink to the thirsty, clothe the naked, shelter the stranger, visit the sick, minister to prisoners, bury the dead) and seven spiritual works (convert the sinner, instruct the ignorant, counsel the doubtful, comfort the sorrowful, bear wrongs patiently, forgive injuries, pray for the living and the dead). Some commentaries, in an effort to offer a catch phrase, simply state that mercy is love in action. It is in this vein that we consider the verses which follow our parable.

This parable is connected to the verses that follow — the story of Mary and Martha (vv. 38-42) — our gospel for the Sunday following the reading of the Parable of the Good Samaritan. An interesting contrast is presented with these two texts. The lawyer asks, “What must I do? (v. 25) and he is told twice to “do this” (poieo v.28, v.37; the present tense in Greek would mean “continuously do”). This emphasis on “doing” could easily become the busyness of Martha. This busyness is in contrast to the continual listening of Mary (v.39) – a companion of the “seeing” asked for in the Good Samaritan parable. In both stories there are unexpected actions — a Samaritan who cares and helps a Jewish man; and a woman who sits as a disciple and listens and learns. The Samaritan is praised because he “went and did”; the scholar of the law is advised to “go and do likewise,” while Mary is praised for not going and not doing. The Samaritan shows us about loving our neighbor. Mary shows us about loving our Lord. Both are vital in living our lives in a Christian manner and together give a complete picture of Christian discipleship in terms of love of neighbor (active service) and love of Jesus (prayer).