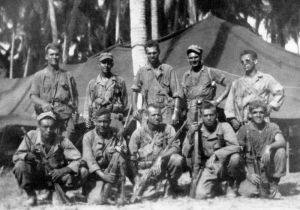 During WWII there was a platoon of Army Rangers deployed well behind enemy lines on a critical mission during the European campaign. A single sniper bullet had killed one of the platoon members. The mission had to continue, but they just could not leave their friend as a stranger in a strange land, buried in an unmarked grave that they might never again find. They remembered a small Catholic church in the area. So, under the cover of the moonless night, they approached the church and rectory, and knocked on the door. After a while a single light came on in the house. Eventually, the door cautiously opened, and the parish priest even more cautiously greeted them. END_OF_DOCUMENT_TOKEN_TO_BE_REPLACED