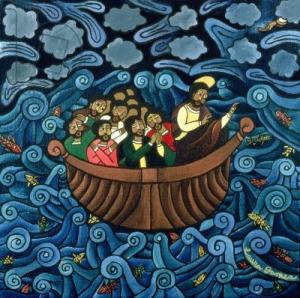 Next Sunday is the celebration of the 19th Sunday in Ordinary Time. You can read a complete commentary on the Gospel here.

22 Then he made the disciples get into the boat and precede him to the other side, while he dismissed the crowds. 23 After doing so, he went up on the mountain by himself to pray. When it was evening he was there alone. 24 Meanwhile the boat, already a few miles offshore, was being tossed about by the waves, for the wind was against it.

25 During the fourth watch of the night, he came toward them, walking on the sea. 26 When the disciples saw him walking on the sea they were terrified. “It is a ghost,” they said, and they cried out in fear. 27 At once (Jesus) spoke to them, “Take courage, it is I; do not be afraid.” 28 Peter said to him in reply, “Lord, if it is you, command me to come to you on the water.” 29 He said, “Come.” Peter got out of the boat and began to walk on the water toward Jesus. 30 But when he saw how (strong) the wind was he became frightened; and, beginning to sink, he cried out, “Lord, save me!” 31 Immediately Jesus stretched out his hand and caught him, and said to him, “O you of little faith, why did you doubt?” 32 After they got into the boat, the wind died down. 33 Those who were in the boat did him homage, saying, “Truly, you are the Son of God.” (Matthew 14:22-33)

After the collection of parables in Mt 13, the 14th chapter takes up what might well be a natural fall out of his teachings that are increasingly vague even as they point to coming judgment – weeds that will be burned and fish that will be discarded. People begin to wonder if Jesus is pronouncing judgment upon them or their “group.” The inevitable pushback or rejection will become more and more present in the narrative or at least in its subtext.  Despite the pushback, Jesus must prepare the disciples. And so after teaching the disciples about the nature of the kingdom and why people do not necessarily believe (Mt 13), the Gospel reaches a pivot point in the telling of Jesus’ rejection at Nazareth, his native place (v.54).  As usual the people are astonished, but in the end they took offense at him (v.57).  Nonetheless Jesus continues to the preparation of disciples.

Where in Mt 13 he taught them via parables, in 14:12-21 he has a “hands on” lesson as he tells the disciples give them some food yourselves as a prelude to feeding the people – and then shows them what they can accomplish through trust in the One whom God sent.  On the heels of the miraculous feeding of the 5,000 we encounter the narrative of calming the seas, Peter’s walking upon the waters, and Jesus’ action to save him.

In the earlier account, Matthew draws heavily upon the biblical imagery of the prophets like Elisha and especially upon the role of Moses. This all points to one of Matthew’s fulfillment motifs: the promise of the great-prophet-like-Moses is coming to pass in the person of Jesus – yet there is something more. God presented the miracles to Moses as mediator to the people. Jesus presents the miracles directly to the people. What are they to make of these revelations? But in the even deeper miracle of the walking upon the water, what are the Apostles to make to that revelation? This is one way the key Matthean themes of “who am I,” the making of disciples, and choosing/ conflict continues in Matthew 14.

Church and Mission. Matthew is the one gospel writer who uses the term ekklesia, the word which means “church.” There is much about this gospel that is well suited for the use of church leaders – in instructing their members in the faith and in determining their own pastoral role. It deals with such practical issues as the sabbath (12:1–14) and divorce (5:31–32; 19:3–9). More generally it includes extended discussion of the right ethical use of the Old Testament law (5:17–48) and the misuse of scribal tradition (15:1–20).  Chapter 23 is a fairly stringent condemnation of religious leadership (the scribes and Pharisees) – and so by way of contrast indicating what true religious leadership involves. Chapter 10 deals with the church’s response to persecution, and chapter 18 concentrates almost entirely on relationships within the Christian community, with special attention given to the proper procedure for dealing with an offender (18:15–20).  It evens provides warnings of threats from outside the community – false prophets and pseudo-Messiahs (7:15–20 and 24:4–5, 11, 23–26); while reminding the community of its own internal problems (7:6, 13–27; 13:24–30, 36–43, 47–50; 22:10–14). It is the church that will be sent on mission in  Mt 26.