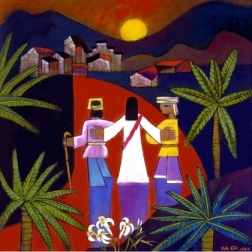 Let’s see…where was I? It has been several weeks since I posted about my time in mission in Kenya. In a previous post, The Long Way Round, I was standing in 3.5 feet of snow, shovel in hand, looking down a long driveway to a dirt road that had not yet been plowed and wondering if this was a sign from God about a faulty discernment process to leave the world as I had known it, and serve as a lay missioner in a far away land. Today, if I was looking at the same scene,  I likely would have thought: “this is beautiful and God put it here. Think I’ll enjoy it and let God take care of it in His own good time.” Back then, I dug my way out.

There was a mission formation program of 10-12 weeks whose goal was to prepare people spiritually, physically, and mentally to live in another culture among the poor, with a Franciscan charism of following Christ. There were five other missioners in the formation program: a young married couple, a young woman, two young men, and me – for whom “young” was no longer an accurate adjective. The folks in charge of the formation program were Fr. Joe, a Franciscan religious sister, and a woman who had long served as a lay missioner overseas.

The first evening we gathered as a community to meet one another, tell each other a little about our life story to this point, and speak about the motivation that brought us to the transom of mission. When I was being introduced, part of the introduction was “…who is going to serve in Namibia.” In that moment, which seemed like one suspended in slowly moving time, I thought where is / what is Namibia. Was it the name of one of the current mission sites? Was it a remote village among the Sahara Desert? I remember thinking, why am I assuming it is on the African continent? I had no idea where this “Namibia” was. But I smiled and nodded. Of course I could always look it up online – not on Wikipedia though. That would not launch for another 5 years.

The folks in my mission class ended up in Brazil, Jamaica, Serbia, but not Namibia. One of the tasks of the staff was to work connections through the Franciscan world to find Franciscan religious orders (women and men) that would be willing to receive a lay mission to live and work beside them in their ministry. It was not an easy task, especially in trying to communicate with mission sites across the far flung globe where email was still in the future, “snail mail” was a 3-4 week turnaround, and phone service was spotty if at all.

As you read this post, did you know the “where and what” of Namibia? At a point I felt a wee bit worldly as I had correctly guessed the African continent and desert location. It wasn’t the Sahara, but rather the Kahlahari in southwest Africa. It also wasn’t where I was being assigned. That had changed to Durban, South Africa or possibly Johannesburg. And eventually it settled on working with a group of Franciscan sisters in Bungoma, Kenya. When I look back on all that, I wonder why there weren’t alarm bells sounding in my head. Maybe there were.

In any case, skipping ahead, the mission program was complete, and it was time to pack up and ship out. There were a few last minute changes. It turns out the Sisters in Bungoma needed a three month delay in receiving us but they had arranged a temporary assignment with a friendly bishop in the Diocese of Homa Bay. Back to the encyclopedia and its maps of Kenya. It turns out that “homa” is the Kiswahili word for “fever.” Life, the military and business had long ago taught me that all plans evaporate upon first contact with the real world – so, no problem – we will adapt. I mean, what else could go wrong?

Life in the world of not-for-profits is one of constant fundraising with all its ups and down, seasons and cycles. It turns out our mission group was in one of those places where there are more promises than checks, and more expenses than anticipated. Fr. Joe gathered us together to be open about the finances. He said that one of the immediate impacts was that they could only buy one-way tickets. You know, there is just no way to say that and make it sound good.

Fr. Joe was clear that we could decide to go, to delay, or to re-think the whole decision. Getting there was a lot more challenging that I had imagined.

1 thought on “Getting there”