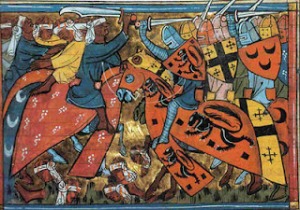 The previous two articles give the background for Francis of Assisi’s mission during the time of the Fifth Crusade.  The previous article introduced two key ideas that seemed to be part of a strong spiritual movement in Francis’ time: peregrination pro Christo (“wandering for the sake of Christ”) which we would now call “pilgrimage,” and the long-established idea of Christian martyrdom.  We have already seen the friars “wandering for Christ” in their trips throughout central Italy.

Martyrdom had its own context in Francis’ life.  The eleventh-century revival of the cult of St. Rufino shaped the ecclesial and communal landscape of Assisi.  The fervor of the age resulted in the construction of a large church that became the focus of civic pride and identity.  By Francis’ time the devotion to the Assisi Martyrs was public and prominent, as mentioned by Francis’ biographers.  It is also evident in Francis’ own writing:  the Sixth Admonition:  “Therefore, it is a great shame for us, the servants of God, that the saints have accomplished great things and we want only to receive glory and honor by recounting them.”

It is also important to understand that Italy had seen the on-and-off again threat from Islamic armies and sea raiders since the 9th century.  At one point, most of southern Italy and Sicily was under Islamic rule; in Francis’ time the Islamic raiders plagued Venice, its merchant fleet, and the coastal cities of the Adriatic.  And this is all background to the general sense of the threat from Muslim armies.  It was more than just the Holy Lands; Italians were well aware of the Islamic power across the breadth of North Africa and the southern Spanish peninsula. Francis quite probably shared the prejudices of Christians of his time against Islam.  He probably knew only Muslims from the chansons de geste, where they were presented as idolaters—adoring statues of Muhammad and of a mysterious god called Termagant, lustful and fanatical.

The fusion of pilgrimage, martyrdom, and the basic Christian mission to evangelize stirred a deep passion within Francis.  In 1212, consumed by a “burning desire for holy martyrdom,” Francis sought to go to the East, to Syria, to “preach the Christian faith and repentance to the Saracens and other unbelievers.” (The First Life, Thomas of Celano)  But the weather did not cooperate; in fact, it stopped Francis dead in his tracks.  For a season, he returned to preaching in and near Assisi.  In 1213, he again felt the impulse of the Spirit to go on mission; this time to Morocco to preach the Gospel to the Muslim Caliph.  On this journey, while in Spain, Francis fell sick and was unable to continue.  Again he returned home.  But in 1219, as other friars were heading to Germany, Hungary, Morocco, and Tunis, Francis took up the mission to Syria, traveling first to Egypt, where he arrived in August in the middle of the crusaders’ siege of the key port city of Damietta.

Egypt is not exactly on the way to Syria, yet Francis seems to have specially intended his mission to being there.  Just as Francis had intended to reach the Caliph in Morocco six years earlier, now it seems likely that his destination was to reach the Sultan of Egypt, Al-Malik al-Kamil, the virtual leader of the Islamic world in his day.  But what was Francis’ missionary intention?  Bishop Jacque de Vitry – not a Franciscan and also an eye witness to the events of Damietta – wrote that “Francis came with a burning zeal for the Christian faith.”  By then even the Friars already knew that a likely consequence of such zeal was martyrdom.  When it became clear that Francis intended to cross the battle lines to visit Malik al-Kamil in order to proclaim the Gospel, was this an indication that Francis really went to the sultan with the intention of suffering martyrdom there, as all the Franciscan sources indicate (Celano, Bonaventure, etc.)?

This is a topic of great controversy among modern Franciscans and medieval scholars.  André Vauchez, a French medievalist noted for his recent and thorough book on Francis, thinks that “some commentators are doubtful today, fearing to attribute to their hero a suicidal attitude or irresponsible behavior.”  Vauchez goes on to write, that “Contrary to what is sometimes affirmed, the search for martyrdom was not in contradiction with his desire to follow Christ, who died on the cross to open to humanity the way to salvation.  To face tribulations and dangers, including the loss of life, in order to spread the Christian faith was, from the beginning, a constitutive element of Franciscan sensibility.  Jordan of Giano recounts that when volunteers were sought to go to Germany at the time of the general chapter of 1221, “almost all friars, enflamed with the desire of martyrdom, stood up and offered themselves up to death,” and that he himself, “assuming that he was going to immediately suffer martyrdom there,” sought to know the names of these heroes—which led him, after a combination of incredible circumstances, to leave with them.  Finally, we know that Clare of Assisi, who was very close to Francis in many regards, when she learned of the tragic end of five Franciscans who had been executed at Marrakesh in 1220, wept because her condition as a female recluse impeded her from going to be martyred in Morocco.”

In leaving to meet the sultan, Francis was thus sincerely convinced that he was going to be martyred for his faith; but he accepted this risk.