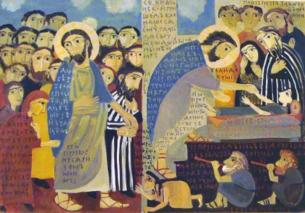 Last week (the 12th Sunday in Year B) we heard Mark’s account of Jesus on the stormy waters of the Sea of Galilee (Mark 4:35-41) during which Jesus calmed the seas with his word. This coming Sunday’s gospel moves into Chapter 5. The chapter begins with Jesus and the disciples returning to Jewish land as they again cross the Sea of Galilee. In Mark, the lake represents literally and figuratively the boundary between Gentiles and Jews.

The lectionary moves into additional miracle accounts while skipping the story of the Gerasene demoniac. Our gospel selection includes a miracle within a miracle. They are the final two miracles of the “miracle section” of Mark (4:35-5:43), which includes four miracles and reactions to the miracles:

In these miracles, Jesus exercises his power over nature (or the god/demon of chaos?), over the demonic army, over sickness, and over death.  Another detail which connects several of the readings is the association of Jesus and uncleanliness: the possessed man from the tombs (who is probably a Gentile), the flow of blood from the woman,  and being in the presence of death all pull Jesus into the category of ceremonial uncleanness.

What is clear is that both the woman and the girl were unclean. In Jewish thought uncleanness was infectious, a human being might incur it by contact with any unclean person or thing (Lev. 5:3); but the law regarded three forms of uncleanness as serious enough to exclude the infected person from society. These were leprosy, uncleanness caused by bodily discharges, and impurity resulting from contact with the dead (Num. 5:2-4). This is not a topic that is just being introduced in Mark 5. Recall the connection with the ending of Mark 4: the exorcism of the unclean spirits from the man living in the (unclean) tombs into the (unclean) pigs. Stoffregen writes that “All three characters in Mark 5 transfer their uncleanness to Jesus, and to each Jesus bestows the cleansing wholeness of God. Mark 5 might be called the ‘St. Jude chapter’ (the saint of hopeless causes), for the Gerasene demoniac, the hemorrhaging woman, and Jairus each find hope in Jesus when all human hopes are exhausted.”

An interesting detail is how the healing of the women with hemorrhages for 12 years is “sandwiched” between the full account of the healing of Jairus’ daughter. Lane [189-90] notes that “The two incidents may have become associated in this way merely because there was an interruption to the journey which proved disastrous for the young girl. But it is possible that Mark saw more in this association: the healing of a woman who has lived with the impingement of death anticipates the healing of a girl who has actually experienced death. The structural device of intercalating one incident within another is paralleled by other instances in which Mark uses the device of anticipation. The detail with which Mark recalls the woman with the  hemorrhage indicates that his concern extends beyond the mere passage of time. The healing experienced by the woman is itself a reversal of death and a pledge of the raising of Jairus’ daughter.”

The account of the healing of the woman and Jairus’ daughter are part of a four-fold miracle narration in which Jesus has shown power over chaotic nature (4:35-41) and destructive demons (5:1-20), and now over debilitating illness and death itself.

In Mark’s Gospel Jesus is closely involved with women nine times. Here in verses 21–43, Mark’s readers enter into two of Jesus’ more moving encounters with women (Jairus’ daughter and the woman with the hemorrhage). Both stories begin with someone seeking out Jesus, the healer. Both stories end in the cure of a person who had been hopelessly sick. Even the way Mark intertwines the two stories shows that Mark wants his readers to hear one important message common to both: “Do not be afraid; just have faith.” (v. 36)! The father of the little girl trusts Jesus even after hearing the report that she is dead (vv. 35–40). He is invited to witness Jesus’ healing touch and word, and then sees his little girl walking around alive (vv. 41–42). The woman shows her trust by touching Jesus (v. 27) and by coming forward in spite of her fear (v. 33). She learns that her faith is rewarded by peace and lasting health (v. 34). Like Jairus and the woman, Christians of every age are urged by Mark to approach Jesus confidently with earnest appeals on behalf of the sick and dying.

Even as he reports Jesus’ miraculous power, Mark preserves the human side of Jesus. For example, the one who has more healing power than the physicians of his day (he cured the woman who had spent all her money and twelve years of time in going to doctors, who failed to help her, v. 26) did not know who touched him (v. 30). Likewise, the one who raises the little girl from her deathbed (v. 41) is also sensitive to her need for something to eat (v. 43). Such details make Mark’s Jesus very approachable; he was perfectly human (he was full of compassion). Mark’s readers can trust him now as those in need did when he walked on this earth. He is sensitive to the needs of those who seek him out.

It is important that Mark’s readers notice the details in this passage that point to the climax of the Gospel. Such hints reveal Mark’s desire to keep his readers moving with Jesus to the place where his journey leads. For example, Peter, James, and John, who witness the raising of the dead girl here, will soon question what “to rise from the dead” means (9:10). Likewise, the fearful, trembling woman with a hemorrhage points to the three women who will leave the empty tomb “seized with trembling and bewilderment,” so afraid that they say nothing to anyone (16:8). There is almost no section of Mark’s Gospel that does not draw his readers to its conclusion. Mark asks his readers, women and men, to stay with Jesus to the end. Even when life’s confusion and tragedies get them down, Mark’s readers are reminded: “Fear is useless. What is needed is trust in God, who brings life, even from death.”