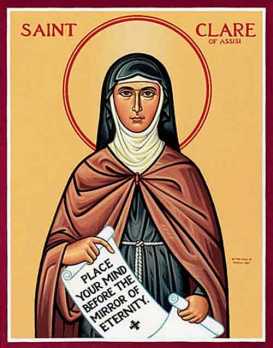 Today across the Church universal and especially among the Franciscan communities, we celebrate the Feast of St. Clare of Assisi. It is a very appropriate gospel chosen for the feast day. In the gospel we hear: “Peter said to Jesus, ‘We have given up everything and followed you. What will there be for us?’” It is a replay of the rich young man who comes to Jesus and asks what more must I do to inherit the Kingdom of God. Jesus tells him to sell everything he has and give it to the poor and then follow Jesus. At least the rich young man supplies the answer to what’s in it for him – even as he walks away sad.

Clare could rightly be called “a rich young woman.” She was born into one of the majores families of Assisi, the nobility with homes “up town”, wealth, land and privilege. She did not want… at least not in the traditional measure. END_OF_DOCUMENT_TOKEN_TO_BE_REPLACED

August 11th, is the feast of St. Clare of Assisi. Clare was born July 16, 1194 as Chiara Offreduccio the eldest daughter of Favorino Scifi, Count of Sasso-Rosso and his wife Ortolana.  There are many legends of how Clare and Francis met, but it is clear that Clare would have know about Francis and his movement of brothers seeking to embrace Holy Poverty.

The Beginning.  Having refused to marry at 15, she was moved by the dynamic preaching of Francis. At 18, she escaped one night from her father’s home, was met on the road by friars carrying torches, and in the poor little chapel called the Portiuncula received a rough woolen habit, exchanged her jeweled belt for a common rope with knots in it, and sacrificed the long tresses to
Francis’ scissors. He placed her in a Benedictine convent which her father and uncles immediately stormed in rage. She clung to the altar of the church, threw aside her veil to show her cropped hair and remained adamant. END_OF_DOCUMENT_TOKEN_TO_BE_REPLACED