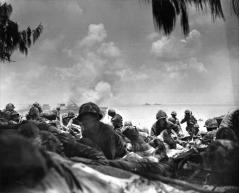 At the end of the movie “Tora! Tora! Tora” (1970 film about the Dec 7, 1941 Japanese attack on Pearl Harbor), Admiral Isoroku Yamamato comments, “I fear all we have done is to awaken a sleeping giant and fill him with a terrible resolve.” It is a great line, prescient in nature, but… Although the quotation may well have encapsulated many of his real feelings about the attack, there is no printed evidence to prove Yamamoto made this statement or wrote it down. William Safire traces its origins to the phrase dubiously attributed to Napoleon, “China is a sickly, sleeping giant. But when she awakes the world will tremble”. But the metaphor of the awakened sleeping giant was apt – and may well have been in Yamamoto’s mind. The admiral had studied, served and traveled in the United States and was well aware of its extensive industrial capability – as were a number of key Japanese military leaders of the day. END_OF_DOCUMENT_TOKEN_TO_BE_REPLACED