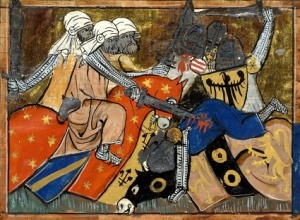 One of the events of Francis’ life that has received scant public attention was his meeting with the sultan of Egypt, Al-Malik al-Kamil in 1219 during the so-called “Fifth Crusade.” This meeting has loomed large in the imagination of the “Franciscan world” because of its effect on the Rule of Life and in the Franciscan charism of missions, but has only recently gained public attention because of the new era of tensions with the Islamic world.  People are surprised to learn that Francis was part of a crusade – a claim that scholars argue to no end as they argue so many other aspects of Francis’ life.  Each side has generally already taken a view of the little poor man from Assisi:  Francis the loyal churchman or Francis the radical reformer.  Those views are often revelatory of how the scholar views the Crusades.  And as with all things, history has a context.