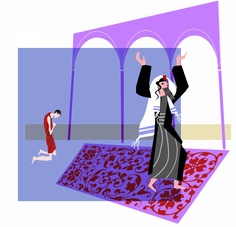 A Parable of Reversal? I tell you, the latter [tax collector] went home justified. We might object to God forgiving the tax collector. He doesn’t actually confess any sins. He makes no statement of repentance. He doesn’t offer to change his life. He doesn’t make any reparations for his sins (as the tax collector Zacchaeus does). This appears to be very cheap grace. This parable probably should not be understood as an example story, but is it simply a story of reversal, as the final saying indicates. If the Pharisee is viewed as a villain and the tax collector a hero, besides the historical inaccuracies, the parable loses its power. They have only received what they deserved. There is no need for the reversal in this last verse.

The parable as a whole is a challenge to our normal expectations. If “justification” comes because of either the Pharisee’s righteous life-style or the tax collector’s prayer, then aren’t they, in some way, justifying themselves? If “justification” comes in spite of one’s life-style or prayer, then it is totally dependent upon God’s graciousness. Our motivation for living rightly or praying honestly needs to be something different from to “get something from God.”

Craddock (Luke, 211) concludes his comments on this text with:

For this parable to continue to speak with power, the preacher will need to find in our culture analogous characters. The Pharisee is not a venomous villain and the publican is not generous Joe the bartender or Goldie the good-hearted hooker. Such portrayals belong in cheap novels. If the Pharisee is pictured as a villain and the tax collector as a hero, then each gets what he deserves, there is no surprise of grace and the parable is robbed. In Jesus’ story, what both receive is “in spite of,” not “because of.” When the two men are viewed in terms of character and community expectations, without labels or prejudice, the parable is still a shock, still carrying the power both to offend and to bless. But perhaps most important, the interpreter of this parable does not want to depict the characters in such a way that the congregation leaves the sanctuary saying, “God, I thank thee that I am not like the Pharisee.” It is possible that the reversal could be reversed.

A Parable of Right Relationships. Culpepper (Luke, 343) concludes his comments with:

The parable of the Pharisee and the tax collector, contrary to some interpretations, is a two-sided parable. To read it as simply a warning against pride, self-sufficiency, or a relationship with God based on one’s own works is to miss the other side of the parable, which connects the Pharisee’s posture before God with his contempt for the tax collector. To miss this connection would be tantamount to emulating the Pharisee’s blindness to the implications of his attitude toward the tax collector. The nature of grace is paradoxical: It can be received only by those who have learned empathy for others. In that regard, grace partakes of the nature of mercy and forgiveness. Only the merciful can receive mercy, and only those who forgive will be forgiven (6:36-38). The Pharisee had enough religion to be virtuous, but not enough to be humble. As a result, his religion drove him away from the tax collector rather than toward him.

In its own way, this parable is as though a scene from the Jesus’ teaching of the greatest commandments: to love God – and to love your neighbor as yourself. If we find our relationship to God in Jesus raises barriers to others, then we have embarked on the journey with blind spots that require