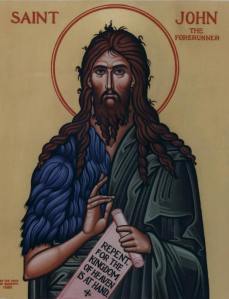 1 In those days John the Baptist appeared, preaching in the desert of Judea 2 (and) saying, “Repent, for the kingdom of heaven is at hand!” 3 It was of him that the prophet Isaiah had spoken when he said:“A voice of one crying out in the desert,‘Prepare the way of the Lord, make straight his paths.’”  4 John wore clothing made of camel’s hair and had a leather belt around his waist. His food was locusts and wild honey. 5 At that time Jerusalem, all Judea, and the whole region around the Jordan were going out to him 6 and were being baptized by him in the Jordan River as they acknowledged their sins. END_OF_DOCUMENT_TOKEN_TO_BE_REPLACED