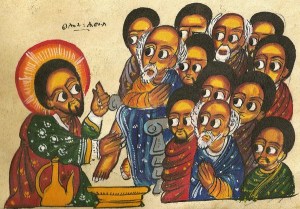 Why Are You Looking? 24 When the crowd saw that neither Jesus nor his disciples were there, they themselves got into boats and came to Capernaum looking for Jesus. 25 And when they found him across the sea they said to him, “Rabbi, when did you get here?” 26 Jesus answered them and said, “Amen, amen, I say to you, you are looking for me not because you saw signs but because you ate the loaves and were filled.

The implication of the narrative is the crowd who finally caught up with Jesus in Capernaum could not have known about the miraculous events (vv.16-21) of the evening nor would they have had an opportunity to react to the ego emini statement – to even ponder, “Who is this that calms the sea.” Their last encounter with Jesus was at the miraculous feeding of the 5,000 and their desire then was to take Jesus by force and make him kind. It is at this point Jesus withdrew from them as the people wanted to remake the Messiah in their own conception. Jesus would not allow that; perhaps Jesus does not want to be found by the crowd “looking for Jesus.”

Their question: “When did you get here?” should be taken as a simple question, but one wonders about that. This is the same crowd that has already sought to control Jesus and make him king. Might not the question be a bit more ominous? As Stroffregen wonders, might it also be a question of control: “We want to know exactly what happened.”

Jesus does not answer the crowd’s question but instead redirects the conversation to the crowd’s motive in seeking him (v. 26). This is not the first group of people to see Jesus perform a sign and they are not the first group of people to be invited to see where, to whom the sign pointed. Jesus’ use of the noun “sign” (sēmeion) invites comparison with the two Cana signs (2:1–11; 4:46–54). The disciples saw the transformation of water into wine as a sign of Jesus’ glory; the royal official saw the healing of his son as a sign of Jesus’ ability to give life, and as a result they all believed in Jesus (2:11; 4:53). This crowd, Jesus says, hasn’t looked past the fullness of their stomach. It would be too much to give them credit for looking at least as far as Jesus being a great prophet like Moses – that conversation peeks in only with later reference to “bread from heaven.” At this point the people only respond to the miracle in terms of their full stomachs; they do not see it as a sign pointing to something greater.