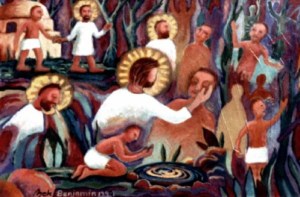 The Petition. 51 Jesus said to him in reply, “What do you want me to do for you?” The blind man replied to him, “Master, I want to see.” 52 Jesus told him, “Go your way; your faith has saved you.” Immediately he received his sight and followed him on the way.

Jesus replied, “What do you wish me to do for you?” One might note that either I miscopied v.51, but the astute student will know that I am citing v.36 when James and John ask for the places of honor. In both verses the verb is thelō. Again Mark is drawing our attention to the differences, this time between Bartimaeus and the disciples. Where they ask for glory, power, and prestige, the blind ask for mercy and healing. The blind man’s faith was recognized by the Lord as an affirmation of confident trust in the gracious mercy of God and his power to heal (cf Mark 5:34). The healing was immediate.

Then Jesus gives him a choice: “Go your way.” The Greek hodos (way) appears again. What “way” will Bartimaeus choose? Jesus adds, “your faith has sozo you.” The word sozo can mean “healed” or “saved.” The healing will be obvious in the simple fact that Bartimaeus can now see. But will the man see more deeply to the matters of eternal life? He does and so chooses to follow Jesus. Thus, the cure of Bartimaeus is climactic in the sense that its outcome marks the goal of this Gospel in the life of its readers: He followed Jesus “on the way.”

Perking [656]: “Some interpreters think that Mark has placed the healing of a blind man as the final event in Jesus’ ministry outside Jerusalem to show that the disciples would eventually be healed of their spiritual blindness. However, the actual details of the miracle play a minor role in the episode. Bartimaeus exhibits the type of faith that forms the basis for healing. He also cries out the truth that Jesus is the merciful Son of David, and the crowd cannot silence him. Such faith points to the success of Jesus’ ministry, despite the voices of opposition and the misunderstanding of those closest to Jesus. Christians through the centuries have repeated a variant of Bartimaeus’s cry for mercy. The prayer ‘Jesus, have mercy’ was repeated continuously to remind the faithful that God’s mercy is always present.”

Mark 10:51 Master. The blind man addressed Jesus respectfully in a way that may indicate that he saw Jesus as his Lord. The term means “my master” as well as “my teacher”. The word is rabbouni, a word used only one other place in the gospels. It is the same term that Mary Magdalene uses when Jesus appears to her post-Resurrection.

I want to see! The blind man clearly trusted Jesus’ power to heal and he had the courage to call out to him despite the crowd’s opposition. This is a picture of persistent faith.

Mark 10:52 your faith has healed you. Jesus commended the man’s faith as the means by which he was healed (5:34; Luke 7:50; 17:19). followed him on they way: That Bartimaeus followed Jesus does not necessarily mean that he became a disciple, like one of the Twelve, but could also mean that he joined the crowd of pilgrims who were accompanying the Master. It would undoubtedly be his intention to go up to the Temple in order to offer the sacrifice of thanksgiving for his sight. .