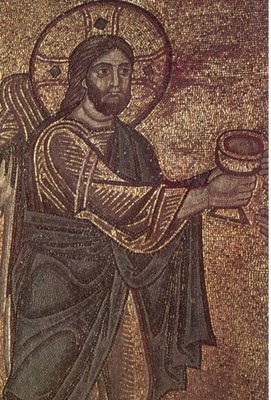 24  Then an argument broke out among them about which of them should be regarded as the greatest.

In the midst of the Passover to break out into an argument about who would be the greatest – imagine. This scene at table is reminder to be attentive and the problem of discernment to know what is important – especially in “real time.”   The problem is that all of us have a Thanksgiving meal, a birthday party – a time when something important was at hand – and we argued about the most trivial of things.

Teachings at the Table

24  Then an argument broke out among them about which of them should be regarded as the greatest. 25 He said to them, “The kings of the Gentiles lord it over them and those in authority over them are addressed as ‘Benefactors’; 26 but among you it shall not be so. Rather, let the greatest among you be as the youngest, and the leader as the servant. 27 For who is greater: the one seated at table or the one who serves? Is it not the one seated at table? I am among you as the one who serves. 28 It is you who have stood by me in my trials; 29 and I confer a kingdom on you, just as my Father has conferred one on me, 30 that you may eat and drink at my table in my kingdom; and you will sit on thrones judging the twelve tribes of Israel.

31 “Simon, Simon, behold Satan has demanded to sift all of you like wheat, 32 but I have prayed that your own faith may not fail; and once you have turned back, you must strengthen your brothers.” 33 He said to him, “Lord, I am prepared to go to prison and to die with you.” 34 But he replied, “I tell you, Peter, before the cock crows this day, you will deny three times that you know me.”

35 He said to them, “When I sent you forth without a money bag or a sack or sandals, were you in need of anything?” “No, nothing,” they replied. 36 He said to them, “But now one who has a money bag should take it, and likewise a sack, and one who does not have a sword should sell his cloak and buy one. 37 For I tell you that this scripture must be fulfilled in me, namely, ‘He was counted among the wicked’; and indeed what is written about me is coming to fulfillment.” 38 Then they said, “Lord, look, there are two swords here.” But he replied, “It is enough!”

Luke’s arrangement of the material makes the harshest contrast between the covenant action of Jesus and the action of the betrayer at the same table. But the role of Judas is mentioned only. The focus of the “teaching” is for the disciples who do not yet fully comprehend who Jesus is or what is at stake on this Passover eve. Jesus’ warns them that even presence at the Lord’s table is no guarantee of fidelity to Jesus. What constitutes fidelity is to bear fruit in ministry and witness. Jesus understands his earthly life is coming to an end and thus the table scene is a last testament in which he admonishes and encourages the apostles to understand authority, leadership and mission in the light of Jesus’ ministry with them: as servant.

Yet, the callousness of the whole group of the Twelve is revealed as their argument about which of them could be guilty of betrayal evolves into a dispute about their greatness. This dispute occurs at a different place in the other Synoptics (Mark 10:42–45; Matt 20:25–28). Jesus tells them that the kingdom has completely different categories of greatness than the world has. He notes ironically that those who tyrannize over their subjects are called “Benefactors”: this was the case in Rome, Egypt, and other Gentile territories. The one who is great in the kingdom of God will be the one who serves in imitation of the Master himself. The Twelve will be given authority, however they will also be subject to temptation and testing. They can expect to share the fate of Jesus.

Jesus addresses the leader of the new patriarchs by his Hebrew name. He says that Satan has asked to test the Twelve; the implication is that God’s special permission is needed to interfere with the Twelve. Jesus’ powerful intercession will help the leader, but Peter is free to choose, however badly. Jesus refers to the coming apostasy of Peter, from which he will return to strengthen his brothers. Peter does not accept the hint of his weakness and protests his allegiance and fidelity. Jesus then utters the prediction of his betrayal with unequivocal clarity. Peter must get over thinking that his special role among the Twelve was earned by his own strength.

Luke’s Gospel reserves a special role for the Twelve, that core group of Jesus’ disciples. The very number was symbolic of the gathering of the lost tribes of Israel, the renewal of God’s people that was the object of Jesus’ mission. His disciples were to be the witnesses to Jesus’ teaching and healing (24:44-49); they were to gather the church and take its mission to the ends of the earth (Acts 1:8) So Jesus prays for Simon and for the other disciples that the power of evil would not sweep them away (22:31-32). Even though Peter will weaken, the power of grace will draw him back, and his ministry, in turn, is to strengthen his brothers and sisters in the community. As we will see, the evangelist does his best to tell the passion story in this spirit, downplaying the impact of Peter’s denial and passing over in silence the flight of the other disciples. For Luke the sure reconciliation that the Risen Christ brings to the community dissolves memories of its infidelities.

In a parting message to all, Jesus asks them to recall the instructions they were given for the preaching mission (9:3). They had been told to rely on God’s providence for the things they would need. Now, because of the impending crisis of Jesus’ passion and death, and in view of the persecution sure to come on the early church, Jesus tells them to prepare themselves well for the struggle, even to preparing to defend themselves. He is speaking figuratively to alert them to the seriousness of the struggle, but they take him literally, producing two swords. “It is enough!” puts an end to a conversation that has been over their heads.

22:25 benefactors: this word occurs as a title of rulers in the Hellenistic world. Where Luke softens Mark’s strong sense of domination (Mk 10:42) to something more neutral, but still the intent is to compare the sense of  those who “lord it over” and those “in authority” with those who would serve

22:28 who have stood by me in my trials: the verb diameno has the sense of “enduring” and continuing to do so. It is Luke’s interpretation of the parable f the sower (8:12, 15) – those who fall away do not bear fruit. Those who persevere bring fruit to maturity. This recognition of fidelity is a prelude to the bestowal of authority in v.29

22:29 I confer a kingdom: The act of conferring (diatithemi) has a clear legal tone. What Jesus as been given by the Father is now conveyed to the apostles.  What has been conveyed – basileia.  As mentioned in other notes, this Greek word is better translated as “reigning” with the kingly authority than referring to a kingdom and its sense of geographical location.

22:30 you will sit on thrones judging the twelve tribes of Israel: Apart from the other gospel accounts, Luke uses the setting of the banquet table of the kingdom to point forward to the role that the apostles will have with the restored Israel in the narrative of Acts.

22:31-32 Simon, Simon…: Jesus’ prayer for Simon’s faith and the commission to strengthen his brothers anticipates the post-resurrectional prominence of Peter in the first half of Acts, where he appears as the spokesman for the Christian community and the one who begins the mission to the Gentiles (Acts 10-11).

22:31 Satan has demanded to sift all of you like wheat: The verb exaiteo often has the sense of “seeking the surrender of someone.” Jesus points out that a period of temptation and testing awaits the apostles – just as it had for Jesus at the beginning of his public ministry (4:1-13)

all of you: literally, “you.” The translation reflects the meaning of the Greek text that uses a second person plural pronoun here.

22:32 but I have prayed that your own faith may not fail: Here the word “you” is singular and is addressed to Peter

once you have turned back:  the verb epistrepho is frequently used for “conversion.” Here it points to Peter’s post denial rehabilitation.

22:35 When I sent you forth…: Previously they lacked nothing as they went out among believers, but in their mission to the world such hospitality can no longer be assumed.

22:36 money bag…sack…sword…cloak: In contrast to the ministry of the Twelve and of the seventy-two during the period of Jesus (Luke 9:3; 10:4), in the future period of the church the missionaries must be prepared for the opposition they will face in a world hostile to their preaching.

22:37 this scripture must be fulfilled: The Suffering Servant canticle of Isaiah (52:13-53:12) is referenced here and has three purposes: (a) interpreting Jesus’ death in terms of the fulfillment of God’s will rather than human plans, (b)interprets this death as one of suffering for the lawless and sinners although he himself is innocent, and (c) it shows that Scripture has foretold by Jesus being arrested as lestes (22:52) and being crucified between two kaourgoi (23:32)

22:38 It is enough!: the farewell discourse ends abruptly with these words of Jesus spoken to the disciples when they take literally what was intended as figurative language about being prepared to face the world’s hostility.

Over the years I have compiled notes, documents, and items of interest about Scripture. Mostly for my own use and in teaching Bible studies in Catholic parishes.  The idea was possible to make something that is approachable, more than “Bible 101″ yet not too overwhelming, yet with notes for people that want more – and hopefully even if a person feels “stretched” by the content, it is not too much.  I have come to realize I have developed a little library – and so I thought I would share some.

When I began to compile I made no attempt to be careful about sourcing, copying entire passages, footnoting, or the even the modicum of appropriate credit – and so there is likely a lot of content that is not my own. My apologies to all.