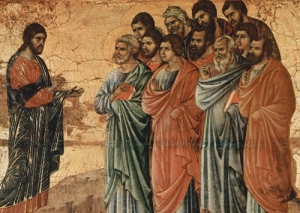 In today’s gospel, Jesus sends the disciples out on their first mission. In the fast paced Markan gospel, the disciples had seen Jesus working for the kingdom and had been helped to reflect on the meaning of his activity and his message.  They had seen his commitment and the how his service to the Kingdom came as a priority to his own needs.  When tracked down after finding a quiet place to pray, when told of the need to minister to the people, Jesus responded: “Let us go on to the nearby villages that I may preach there also. For this purpose have I come.” (Mk 1:38)

Jesus now took a further step in their formation.  He gave the disciples responsibility to act without his being present as he sent them on mission. Jesus trusted them, even if they were still learning. But they needed to experience ministry in service of the people of God. That experience would raise and make real for them the meaning of the kingdom. Along the way they would learn that imperfection does not disqualify someone from mission or from responsibility.  It did not matter they might be out of their depth. Their role was further the Kingdom.  The Kingdom was what mattered.

He sent them out in twos. I am sure companionship and safety were reason enough, but perhaps there are other reasons.  One was to support each other in preaching and exemplifying the Kingdom. “He instructed them to take nothing for the journey but a walking stick – no food, no sack, no money in their belts. They were, however, to wear sandals but not a second tunic.” They were to accept the generosity of strangers and the providence of God. Perhaps their dependence on generosity was also an instance of the kingdom already present, even if only partially.  For Jesus the God of the Kingdom was the God of “enough.” It was and is a call for people live in line with their own, ever aware of each other’s inherent human dignity.  Their reliance on God was the living out of their faith in God.  It is the essence of the Kingdom.

1 thought on “The Kingdom of enough”