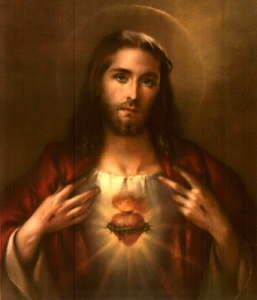 The Solemnity of the Most Sacred Heart of Jesus is a celebration that falls 19 days after Pentecost, on a Friday. The liturgical feast was first celebrated in Rennes, France. The liturgy was approved by the local bishop at the behest of St. John Eudes, who celebrated the Mass at the major seminary in Rennes on August 31, 1670. You’ll notice that the first celebration was not situated in the days following Pentecost. St. John Eudes composed a Mass and a set of prayers for outside the Mass (referred to as an “Office”) that were quickly adopted in other places in France.

In 1856, Pope Pius IX established the Feast of the Sacred Heart as obligatory for the whole Church, to be celebrated on the Friday after Corpus Christi.

The Roots of the Devotion
But the devotion to the Sacred Heart of Jesus is much older. The beginnings of a devotion of the love of God symbolized by the heart of Jesus are found in the fathers of the Church, including Origen, Saint Ambrose, Saint Jerome, Saint Augustine of Hippo, Saint Hippolytus of Rome, Saint Irenaeus, Saint Justin Martyr, and Saint Cyprian. In the 11th century this devotion found a renewal in the writings of Benedictine and Cistercian monasteries. This expression was given form by Saint Bernard of Clairvaux in the 12th century in his famous poem/prayer “O Sacred Head Surrounded.”

A Franciscan Connection
In the 13th century, the Franciscan St. Bonaventure’s work “With You is the Source of Life” (which is the reading for the Divine Office on the Solemnity of the Sacred Heart) began to point to the heart as the fountain from which God’s love poured into our lives:

“Take thought now, redeemed man, and consider how great and worthy is he who hangs on the cross for you. His death brings the dead to life, but at his passing heaven and earth are plunged into mourning and hard rocks are split asunder. It was a divine decree that permitted one of the soldiers to open his sacred side with a lance. This was done so that the Church might be formed from the side of Christ as he slept the sleep of death on the cross, and so that the Scripture might be fulfilled: ‘They shall look on him whom they pierced.’ The blood and water, which poured out at that moment, were the price of our salvation. Flowing from the secret abyss of our Lord’s heart as from a fountain, this stream gave the sacraments of the Church the power to confer the life of grace, while for those already living in Christ it became a spring of living water welling up to life everlasting.”

Also in the 13th century we find the very popular devotional “Vitis mystica” (the mystical vine) a lengthy devotional to Jesus, which vividly describes the “Sacred Heart” of Jesus as the font and fullness of love poured into the world. This work is anonymous, but most often attributed to St. Bonaventure.

The Devotion Spreads Slowly
At the end of the 13th century, St. Gertrude, on the feast of St. John the Evangelist, had a vision in which she was allowed to rest her head near the wound in the Savior’s side. She heard the beating of the Divine Heart and asked John if, on the night of the Last Supper, he too had felt this beating heart, why then had he never spoken of the fact. John replied that this revelation had been reserved for subsequent ages when the world, having grown cold, would have need to rekindle its love.

From that time until the time of St. John Eudes the devotion continues to spread, primarily as a private devotion, but one that was increasingly wide-spread. The Franciscans continued the devotion within their fraternity and their churches, but other religious orders also prayed the devotion: the Jesuits, the Carmelites of Spain, and the Benedictines.

The Devotion Renewed: Saint Marguerite Marie Alacoque
In the late 17th century the devotion was renewed and adopted elsewhere, especially following the revelations to Saint Marguerite Marie Alacoque. The saint, a cloistered nun of the Visitation Order, received several private revelations of the Sacred Heart, the first on December 27, 1673, and the final one 18 months later. The visions revealed to her the form of the devotion, the chief features being reception of Holy Communion on the first Friday of each month, Eucharistic adoration during a “Holy hour” on Thursdays, and the celebration of the Feast of the Sacred Heart.

Initially discouraged in her efforts to follow the instruction she had received in her visions, Alacoque was eventually able to convince her superior of the authenticity of her visions. She was unable, however, to convince a group of theologians of the validity of her apparitions, nor was she any more successful with many of the members of her own community. She eventually received the support of St. Claude de la Colombière, S.J., the community’s confessor for a time, who declared that the visions were genuine. Alacoque’s short devotional writing, La Devotion au Sacré-Coeur de Jesus (Devotion to the Sacred Heart of Jesus), was published posthumously in 1698. Here is an excerpt:

“And He [Christ] showed me that it was His great desire of being loved by men and of withdrawing them from the path of ruin that made Him form the design of manifesting His Heart to men, with all the treasures of love, of mercy, of grace, of sanctification and salvation which it contains, in order that those who desire to render Him and procure Him all the honor and love possible, might themselves be abundantly enriched with those divine treasures of which His heart is the source.”

The devotion was fostered by the Jesuits and Franciscans, but it was not until the 1928 encyclical Miserentissimus Redemptor by Pope Pius XI that the Church validated the credibility of Alacoque’s visions of Jesus Christ in having “promised her [Alacoque] that all those who rendered this honor to His Heart would be endowed with an abundance of heavenly graces.”

The World Consecrated to the Sacred Heart of Jesus
Maria Droste zu Vischering, was a German noble women, who at the age of 25 joined the congregation of Our Lady of Charity of the Good Shepherd, in Munster. She was given the name, Sr. Mary of the Divine Heart. In 1894, at the age of 31, she was transferred to Portugal and appointed superior of Oporto, Portugal. While there she reported some messages from Jesus Christ in which she was asked to contact the pope, requesting the consecration of the world to the Sacred Heart of Jesus.

On June 10, 1898, her confessor at the Good Shepherd monastery wrote to Pope Leo XIII stating that Sister Mary of the Divine Heart had received a message from Christ, requesting the pope to consecrate the entire world to the Sacred Heart. The pope initially did not believe her and took no action. However, on January 6, 1899 she wrote another letter, asking that in addition to the consecration, the first Fridays of the month be observed in honor of the Sacred Heart. In the letter she also referred to the recent illness of the pope and stated that Christ had assured her that Pope Leo XIII would live until he had performed the consecration to the Sacred Heart.

Pope Leo XIII commissioned an inquiry on the basis of her revelation and Church tradition. In his 1899 encyclical letter Annum Sacrum, Leo XIII decreed that the consecration of the entire human race to the Sacred Heart of Jesus should take place on June 11, 1899. Here is the consecration Pope Leo composed for the consecration:

“Most sweet Jesus, Redeemer of the human race, look down upon us humbly prostrate before Thine altar. We are Thine, and Thine we wish to be; but to be more surely united with Thee, behold each one of us freely consecrates himself today to Thy most Sacred Heart.

“Many indeed have never known Thee; many too, despising Thy precepts, have rejected Thee. Have mercy on them all, most merciful Jesus, and draw them to Thy sacred Heart. Be Thou King, O Lord, not only of the faithful who have never forsaken Thee, but also of the prodigal children who have abandoned Thee; grant that they may quickly return to Thy Father’s house lest they die of wretchedness and hunger.

“Be Thou King of those who are deceived by erroneous opinions, or whom discord keeps aloof, and call them back to the harbor of truth and unity of faith, so that there may be but one flock and one Shepherd.

“Be Thou King of all those who are still involved in the darkness of idolatry or of Islamism, and refuse not to draw them into the light and kingdom of God. Turn Thine eyes of mercy towards the children of the race, once Thy chosen people: of old they called down upon themselves the Blood of the Savior; may it now descend upon them a laver of redemption and of life.

“Grant, O Lord, to Thy Church assurance of freedom and immunity from harm; give peace and order to all nations, and make the earth resound from pole to pole with one cry: ‘Praise be to the divine Heart that wrought our salvation; to it be glory and honor forever.’” Amen

The 100th Anniversary of the Feast of the Sacred Heart
In a landmark encyclical, Haurietis aquas (Latin: “You will draw waters”; written May 15, 1956) Pope Pius XII began his reflection by drawing from Isaiah 12:3, a verse which alludes to the abundance of the supernatural graces which flow from the heart of Christ. Haurietis aquas called the whole Church to recognize the Sacred Heart as an important dimension of Christian spirituality. Pius XII gave two reasons why the Church gives the highest form of worship to the Heart of Jesus. The first rests on the principle whereby the believers recognize that Jesus’ Heart is hypostatically united to the “Person of the Incarnate Son of God Himself.” The second reason is derived from the fact that the Heart is the natural sign and symbol of Jesus’ boundless love for humans. The encyclical recalls that for human souls the wound in Christ’s side and the marks left by the nails have been “the chief sign and symbol of that love” that ever more incisively shaped their life from within.

In a letter on May 15, 2006 Benedict XVI wrote: “By encouraging devotion to the Heart of Jesus, the Encyclical Haurietis aquas exhorted believers to open themselves to the mystery of God and of his love and to allow themselves to be transformed by it. After 50 years, it is still a fitting task for Christians to continue to deepen their relationship with the Heart of Jesus, in such a way as to revive their faith in the saving love of God and to welcome Him ever better into their lives.

As the encyclical states, from this source, the heart of Jesus, originates the true knowledge of Jesus Christ and a deeper experience of His love. Thus, according to Benedict XVI, we will be able to understand better what it means to know God’s love in Jesus Christ, to experience Him, keeping our gaze fixed on Him to the point that we live entirely on the experience of His love, so that we can subsequently witness to it to others.

1 thought on “Most Sacred Heart of Jesus”