In St. Paul’s letter to the Romans he quickly addresses gentile people’s culpability for knowing – or at least having an strong inclination of – the one true God given they did not have the benefit of the covenant relationship with Him. Paul writes: “For what can be known about God is evident to them, because God made it evident to them. Ever since the creation of the world, his invisible attributes of eternal power and divinity have been able to be understood and perceived in what he has made. As a result, they have no excuse; for although they knew God they did not accord him glory as God or give him thanks. Instead, they became vain in their reasoning, and their senseless minds were darkened. While claiming to be wise, they became fools.” (Romans 1:19-22) END_OF_DOCUMENT_TOKEN_TO_BE_REPLACED 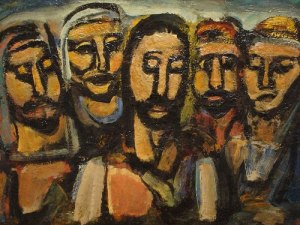 Luke was written to “Most Excellent Theophilus,” whom I think was probably a Roman official. I ask, “What do you say to the Romans?” I think that Luke’s unique features in the passion come about because he is writing to the Romans, who had some major misconceptions about Jesus and the group of people who followed him. END_OF_DOCUMENT_TOKEN_TO_BE_REPLACED