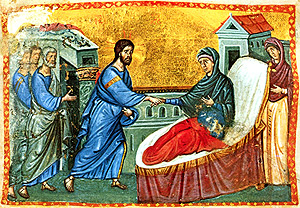 32 When it was evening, after sunset, they brought to him all who were ill or possessed by demons. 33 The whole town was gathered at the door. 34 He cured many who were sick with various diseases, and he drove out many demons, not permitting them to speak because they knew him.

This summary report reflects the point of view of a narrator who was excited with what he witnessed: “they brought to him all who were ill or possessed by demons”; “all the city was gathered at the door.” The incident is intimately connected with the previous narratives by the time sequence, the reference to the door of the home of Peter and Andrew, and the detail of the silencing of the demons. The time indicated is early evening, following the sunset which brought the Sabbath to a close. In response to the report from those present in the synagogue earlier in the day the people were bringing the sick or possessed to the house where Jesus was. In time it seemed as if the whole city was gathered at the door. In this connection v.33 is particularly vivid, the tense of the verb suggesting the growing crowds. Apparently the people delayed their coming until the close of the Sabbath lest the day be infringed by the carrying of the sick or acts of healing when there was no immediate peril to life. In this connection Jeremiah 17:21 ff., which prohibits the bearing of a burden on the Sabbath, may have been important in popular thinking. Twice in this passage (vv.32, 34) and in Mark 6:13 a clear distinction is observed between general sickness and demonic possession. It is unwarranted to obscure such distinctions with the hypothesis that what was described in antiquity as possession by demons is identical with various forms of psychoses recognized today by the medical profession.

Jesus responded to the expectations of those who came, healing the sick and expelling the demons. The term “many,” in the statement that Jesus healed “many that were sick,” is used inclusively and is equivalent to the “all” of v.32; it reflects upon the large number of those who came for healing. The reference to the demons who knew Jesus is general, but intelligible in the light of the encounter with demonic possession reported in vv.23–26. In that instance Jesus was recognized as the divine Son, the Bearer of the Holy Spirit. As earlier he had muzzled the defensive cry of the unclean spirit, here he silences their shrieks of recognition, for they are powerless before him.

It is not adequate to read this narrative as a report of success in the initial phase of the Galilean mission. The people come to Jesus, not because they recognized his dignity and function but because it is rumored that a miracle worker has come in their midst. Jesus had come to preach repentance and the nearness of the kingdom but the people think only of relief from pain and affliction. They fail to perceive the significance of Jesus’ conflict with demonic power. In compassion and grace Jesus extends to them authentic healing, but it is not primarily for this purpose that he has come. In the morning he withdraws from the village and the clamoring crowds.

Witherington (The Gospel of Mark, 101) writes about these verses:

We must beware of reading vv. 32-34 as simply a success story. The people are not coming to Jesus for the reason he wants them to come. They come for relief from physical ailments, but Jesus came to preach the dominion of God. The reader may be meant to think that the crowds did not see the exorcisms and healings as Jesus did – as victories in the conflict with Satan, and as examples that the dominion was breaking in. The crowds may have seen them as only a temporary respite from their woes.

We thus may be able to make some contrasts: the “big picture” (the breaking in of the dominion of God) vs. the “little picture” (temporary respite from woes); the global picture or the community (congregation, neighborhood) vs. me (my life, my feelings). While those who came, even with poorly defined motivations, were healed, Jesus came so that we might see much more than just what might happen to me.

Mark 1:34 not permitting them to speak. After the healing, Jesus continued to perform exorcisms but prevented the demons from giving their testimony. This remark continues the theme of Jesus’ authority from the first exorcism.