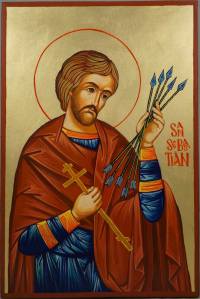 Today’s liturgical possibilities include an optional memorial for St. Sebastian who is the patron saint of athletes. Relatively little is known about St. Sebastian, a Christian martyr of the 3rd century. It is believed that he was an officer in the imperial bodyguard and Christian, but not openly so. When his faith was discovered the Diocletian, the Roman emperor, sentenced him to death. Sebastian was tied to a tree, executed by archers and left for dead. However, he had not died. He was found alive and nursed back to health. When at last he was able, he publicly announced his faith, denounced Diocletian for his persecution of Christians, and for this was martyred as he was beaten to death by the emperor’s guard. It is his virtues and gifts of strength, stamina, perseverance, courage and justice in the face of adversity and a superior opponent – and yet he gave his all.

The readings from today’s Mass include optional readings in celebration of the saint. The first reading is from the first letter of St. Peter and includes the following admonition:

Always be ready to give an explanation
to anyone who asks you for a reason for your hope,
but do it with gentleness and reverence (1 Pt 3:15)